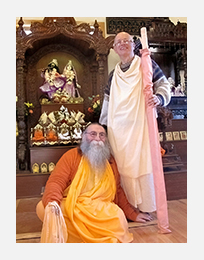 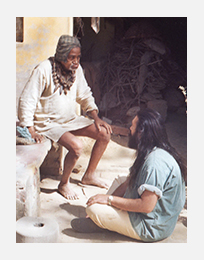 “I offer my respectful obeisances unto His Holiness Śrī Narahari Dāsā Bābājī of Vrindavana, who is very dear to Lord Gaura on this earth, having taken shelter at His lotus feet.”

His Holiness Narahari Dasa Babaji Maharaja, a pure devotee of God, completely surrendered to the Lord, left a deep impression in the life of Prabhuji.

Babaji was born in the Indian village of Kalida and left his body on November 3rd, 2001, at the age of 108 in Vrindavana, where he had lived for most of his life. He started his spiritual life at a very early age. He was a direct and personal disciple of is Holiness Nityananda Dasa Babaji, a resident of Varsana.

The saint lived every moment in ecstatic love for Their Lordships Sri Sri Radha and Krishna, passing his days by chanting hundreds of rounds of the Maha-mantra, and worshiping Tulasi Devi and Lord Giriraja. Without a doubt, Babaji was a pure devotee and a completely enlightened master.

Babaji personally gave Prabhuji important guidance in Krishna Consciousness. He held an important place along the path of our spiritual master, Prabhuji, and he is and will always be a source of inspiration for all the members of our mission.