A mantra is not a prayer invented by a human being or composed by some privileged intellect, but comes directly from the realization of a ṛṣi, or “realized seer.” It is a mystical energy contained within a sound structure. It consists of a sacred word or phrase containing a divine power whose effect cannot be verbalized. Just as it is impossible to verbally explain the taste of an orange or an apple, the mantra has to be experienced directly.

Likewise, the sage Patañjali says in his Yoga-sūtra (1.13), “Abhyāsa is the effort to obtain stability in that state of cessation of the fluctuations of the mind.” And he explains in sūtra 1.14: “But this practice is firmly rooted only after it has been cultivated properly and for a long time uninterruptedly.”

The Sanskrit word abhyāsa means “repetition.” Patañjali reminds us that to advance on the yogic path, abhyāsa is necessary. Only through repetition is it possible to achieve authentic transformation.

Attentive and devoted repetition purifies us and such power is released by deeply influencing the sadhaka. The mantra-japa helps us to transcend darkness and spiritual stagnation.

As stated in the last chapter of the Kulārṇava-tantra: “Japa is so called because it removes the accumulated sin of thousands of lives and reveals the Supreme Deity.” Sin refers obviously to the egoic phenomenon and to the ignorance of who we really are. Mantra is a bridge that leads the devotee to God. It is a relatively simple spiritual discipline because there are no restrictions on chanting the divine names with devotion. Hari-nama-japa is not just repeating the mantra automatically but with devotion.

Mantra-japa is mentioned in many scriptures as a highly effective means to transcend the negative influences of this age of Kali.

“The sixteen names of the Hare Kṛṣṇa māhā-mantra: Hare Kṛṣṇa Hare Kṛṣṇa, Kṛṣṇa Kṛṣṇa Hare Hare, Hare Rāma Hare Rāma, Rāma Rāma Hare Hare destroy all the inauspiciousness of the age of Kali. This is the conclusion of all the Vedas.” (Kali-santarana Upanisad from Kṛṣṇa Yajur Veda)

“One who chants the holy name of the Lord is immediately freed from the reactions of unlimited sins, even if he chants indirectly [to indicate something else], jokingly, for musical entertainment, or even neglectfully. This is accepted by all the learned scholars of the scriptures.” (Srimad-Bhagavatam, 6.2.14)

“The nama sankirtana (public chanting) of Hare Kṛṣṇa māhā-mantra delivers a complete revelation of all of spiritual reality.” (Brahmanda Purana, 6.59–60)

“Hare Kṛṣṇa Hare Kṛṣṇa, Kṛṣṇa Kṛṣṇa Hare Hare, Hare Rāma Hare Rāma, Rāma Rāma Hare Hare: This sixteen-name, thirty-two syllable mantra is the māhā-mantra in the age of Kali by which all living beings can be delivered. One should never abandon chanting this māhā-mantra and take to other so-called purificatory processes which are practiced by rascals or engage in chanting other metrical compositions of the name of Kṛṣṇa that are against the pure conclusions of the scriptures or are filled with rasabhasa. About this divinely spiritual māhā-mantra, which delivers one from material existence, the original guru, Lord Brahma, has said, kali-santararadi srutite, ‘The srutis have declared this mantra to be the best means of deliverance in the age of Kali’. Having all heard this from Brahma, the sons and disciples of Brahma, beginning with Narada, all accepted the Hare Kṛṣṇa māhā-mantra and, having meditated on it, attained perfection.” (Ananta-samhita is part of the Narada Pancaratra)

“All the grievous sins of one who worships Lord Sri Hari, the Lord of all lords, and chants the holy name, the māhā-mantra, are removed.” (Padma Purana, Svarga Khanda, 50.6)

It should be noted that for a mantra to be truly effective it must be received directly from a real master within an authentic line of disciplic succession. A mantra received from just anyone does not contain divine power. As stated in the Padma Purana:

“Any mantra that does not descend through a line of disciplic succession (parampara) is considered useless.” (Padma Purana).

Prabhuji was initiated by his master into the Māhā-mantra, devoting many years of his life to its nectarean repetition.

Retroprogressive Hatha Yoga is the result of Prabhuji’s efforts to improve his own practice and teaching. It is a system based solely on the teachings of his gurus and the sacred scriptures.

Prabhuji has systematized different traditional yoga techniques to create a methodology suitable for the Western public. 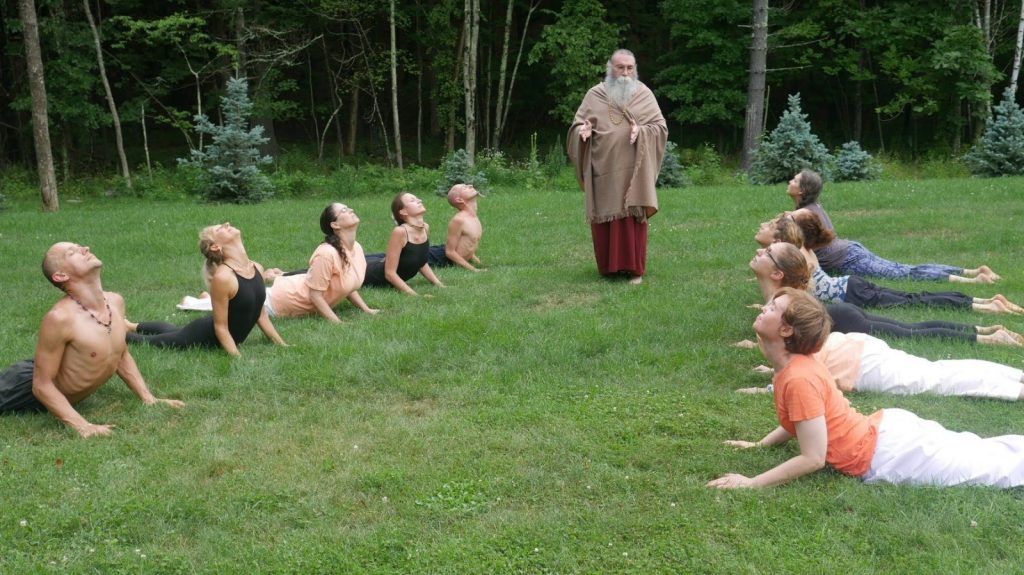 Social benefit to the community

Does the Prabhuji Mission offer any social benefits in a practical way to the community?

Prabhuji founded his mission with the intention of serving humanity and benefiting it both spiritually and socially. One of the ways in which this noble aspiration is expressed is “Prabhuji Annadanam” or the “Prabhuji Food Distribution Program.” On a weekly basis, the Prabhuji Mission distributes food free of charge to anyone who comes to the Avadhutashram. There is no need to register or present documents.

The term annadānam is composed of two words: annam, or “food” and dānam, or “the act of giving and sharing.” Thus, annadānam means “feeding the hungry and needy.” Among the various kinds of giving, the act of sharing food is called māhādānam, or the “great act of sharing,” because satisfying hunger is a basic and essential service.

The Taittirīya Upaniṣad states, “All life force comes from food (annam vai pranah) and let food be produced in abundance (annam bahu kurveet).” The importance of charity is clearly explained in the Varāha-purāṇa. Among the different ways in which charity is expressed, sharing food is considered the highest. In the Varāha-purāṇa, Śrī Varāha says, “One who gives food, gives all that is worth giving in this world.” In the Bhagavad Gita, Śrī Kṛṣṇa states, “All beings evolve from food (annād bhavanti bhūtāni). Even in the Vedas, Upanishads, Rāmāyana or Mahābhārata during all these periods, feeding a hungry person was considered the greatest service to humanity.

“Give food, give food, give food” is Kṛṣṇa’s advice to Yudhiṣṭhira in the Bhaviṣya-purāṇa when referring to dānam, or “the giving.” Yudhiṣṭhira requests Kṛṣṇa to impart to him the essence of Bhīṣma Pitamaha’s discourse in the Śanti Parva of the Mahābhārata about dharma. Then, Kṛṣṇa says, “Both the animate and inanimate worlds are sustained by food. The bestower of food is the bestower of life and obviously of all the rest. Therefore, one who desires good in this world and beyond should especially strive to give food. He should offer food with venerable hospitality to the old man, the child, and the exhausted traveler.”

For Prabhuji, service to the human being is service to God, giving food to those in need is equal to a yagña, or ‘the most elaborate ritual sacrifice’.

“This is mine, that is his, say the small minded. The wise believe that the entire world is a family.” (Māhā Upanishad, 6.71–75)

How does Prabhuji view the different paths of yoga such as bhakti, karma, jñāna, rāja, tantra, karma, kuṇḍalinī, and so on?

Prabhuji accepts all the different yogic modalities as integral paths of Retroprogressive Yoga. If we wish to prepare a delicious meal, we will need the correct ingredients and the recipe explaining the preparation process. Time and interest are also required to carry out the task successfully. In the same way, Retroprogressive Yoga combines the different yogic modalities in an integral way. Sadhakas, or “aspirants,” should receive from their master the appropriate combination according to their particular situation.

What is the need for a temple like the Śrī Śrī Radha-Śyāmasundara Mandir in the Avadhutashram?

A temple constitutes a place where human beings gather with a selfless spirit and devotional attitude to worship God. It is the proper place for the practice of bhakti-yoga. It is a place capable of elevating us to the recognition of consciousness. Seeing the deities, praying, and leaving a donation are pious acts traditionally done when visiting a temple. A true mandir is not only a religious site, but also a spiritual one. There are many schools, colleges, institutes, universities, and educational institutions. However, temples are not only capable of informing us, but also of transforming us.