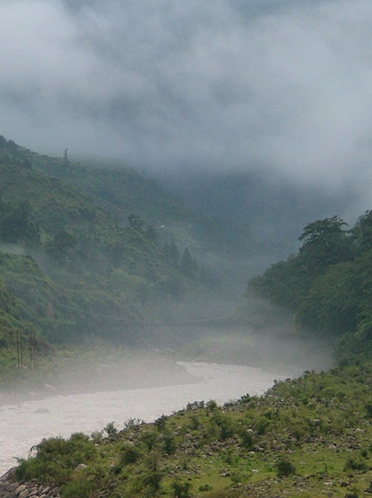 A yogi with long hair and a beard lived in a forest in a small hamlet at the bank of a river. He was given food by a simple girl who had great devotion for Lord Sri Sri Radhe Shyam. The girl was a milkmaid, and she gave milk to the yogi every day. After some time, the milkmaid requested a mantra from him. The yogi gave her the maha-mantra: Hare Krishna, Hare Krishna, Krishna Krishna, Hare Hare, Hare Rama, Hare Rama, Rama Rama, Hare Hare, telling her:

—“This mantra is very powerful; its repetition will help you to cross the ocean of ignorance.”

One day, when the milkmaid was on her way to take the milk to the yogi, there began such a torrential rain that the river overflowed and started to flood.  It became very difficult to cross the river by boat, and the girl despaired, wondering how she would be able to take the food to the yogi. Suddenly, the girl remembered what the yogi had said to her when he gave her the maha-mantra:

—“This mantra is very powerful; its repetition will help you to cross the ocean of ignorance”.

She said to herself…

—“If the yogi spoke of an ocean and this is, after all, just a river, it will surely be very easy to cross with the help of this powerful mantra and their Lordships Sri Sri Radhe Shyam”.

With immense devotion, she fixed her heart on the divine couple and with absolute confidence, walked on the water repeating the mantra:

When the yogi saw her arrive, he asked her with tremendous surprise:

— “How did you manage to arrive here in such a flood?”

To which the girl replied:

—“You told me clearly that through the repetition of this powerful mantra, Hare Krishna, Hare Krishna, Krishna Krishna, Hare Hare, Hare Rama, Hare Rama, Rama Rama,  Hare Hare,  I could cross the ocean of ignorance, which gave me the idea that if the power of this mantra was great enough to help me cross the sea… then without a doubt,  it would  suffice  to cross the river. And it was exactly like that, by repeating the mantra and with the help of my beloved Radhe Shyam, that I was able to cross the river.”

After her explanation, the yogi became filled with vanity, thinking of how powerful he was, as he had given her a mantra that could produce such effects. He saw the miracle as a result as his own elevated degree of spiritual development and evolution.

Some days later, the yogi needed to go to the village; however, the monsoon rains had not yet ended, so the river continued to be swollen and it remained impossible to cross by boat. The yogi reflected that if the repetition of the mantra functioned for a girl who was just a simple, ignorant and illiterate milkmaid, then he could be completely certain that it would give the same results for him, as a great yogi, a pure, renounced devotee, and one knowledgeable in the scriptures.

Repeating the mantra, the yogi entered into the river. The current quickly began to carry him away, and the yogi was pulled under the water and drowned.